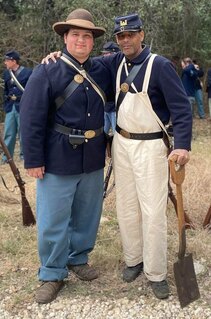 Jon & I at the Battleground 1863 Reenactment 3/12-13/2022
The first time I wore my blue uniform I knew beyond a shadow of a doubt this was my calling. But for a while now I've started questioning that, and even contemplated leaving living history.

3/12-13/2022 I spent the weekend at Camp Mabry National Guard Armory Austin, TX, for their Battleground 1863 reenactment. There I ran into Jon, he said he thought he knew me and asked me if I have ever done a program at the Gorge Bush library in Bryant, TX, "I said yes." Then he asked me if I do Buffalo Soldier programs, "I said yes." Then he said I do know you, you came to the George Bush library when I was in the third grade and after the program, you spent some time talking to my mother and me about what goes into a haversack.

I then said, "so what you are trying to tell me is, that interaction got you started in living history." He then said, with a smile, that's why I'm here today (showing off his uniform). Jon said for the last three years he has been going into the local schools and doing living history programs, he also oversees the Rockdale I&GN Depot Museum in Thorndale TX and is the founder of Moerbe Film Production.

I have been involved with living history for 11 years and this is the greatest compliment I've ever received. I have only had two goals, preserve the legacy of my ancestors and find innovative ways to get young people involved with living history. I guess that goes to show, even though you can't see the impact you are making it doesn't mean you aren't making a difference in this world.

Oh, by the way, Jon graduates high school this year...